Ben Mason grew up in East Anglia before starting his military music career as a professional trombonist and pianist within The Band of The Grenadier Guards.  Then followed a Bandmaster course at Kingston University including a conducting course at The Royal Military School of Music.  Since then, Ben has spent his years within the military as Bandmaster of The Band of The Queen’s Division, Bandmaster of the Royal Artillery Band Orchestra and The School Bandmaster of The Royal Military School of Music – The British Army’s Senior Bandmaster post.  Ben is currently a Commissioned Officer (Director of Music) serving with The Corps of Army Music.

Outside of his military music commitments, Ben previously held positions as Musical Director of Cambridgeshire Youth Wind Orchestra and Belvedere Concert Band.  He is currently Associate Conductor of Watford Philharmonic Orchestra and Choral Society as well as working extensively with various youth and community projects.  It goes without saying that HCB feels immensely lucky to be included in Ben’s current (very busy!) portfolio of musical commitments.

Carole held the position of Musical Director from 1994 to 2004. A graduate of the Royal Academy and also a French Horn player, Carole developed the band in numbers and musical skill.  She has held Music teaching positions in and around Cambridge since leaving the band and still performs regularly with many local musical ensembles.

Laurie formed the band in 1993, at the request of former youth band members, following 25 years as a musician with the RAF.  Laurie is fondly remembered by the founder members of HCB and also any later youth band members that came into contact with him.  He was a talented and renowned local musician and band leader; the band are very proud of this musical heritage and still play from many of his arrangements. 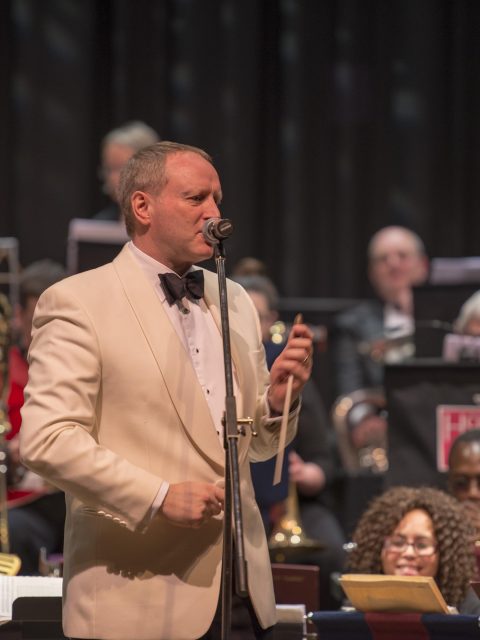 David McClintock has been at the helm for 13 years now, directing the band’s 50-or-so weekly rehearsals and 10 concert performances each year.

As the band’s longest-serving Musical Director, David’s dedication and thorough approach has greatly improved the standard of the band’s musical performances during his time as the boss. David is a demanding conductor but this enables him to get a phenomenal level of concentration and effort during performances from an amateur community wind band.  This is proven by the band’s ability to successfully perform alongside some of the UK’s best military bands at their popular massed bands concerts over the last 6 years.

David’s drive for improvement has also led to the recording and production of 2 different CDs of varying and popular band repertoire. These CDs are sold at concerts during the year, to raise band funds.

As with many professional musicians, David started his playing career in the local youth band and orchestra followed by the local Philharmonic orchestra, before embarking on his professional player career in the armed forces. David served as an army musician for nine years culminating with three years in the premier military band of the services, the Royal Artillery Band and Orchestra.

David studied French Horn at the Royal Military School of Music and the London College of Music. In his time at Kneller Hall, David successfully took the Sergeant’s course and subsequently went on to pass the Licentiate of Trinity College, London (LTCL).

After leaving the armed forces David rejoined HCB and held the position of Principal Horn within the band before taking up the baton in 1994. He continues to play regularly with various brass ensembles in and around Cambridge. More recently, David has also become the Musical Director of the Musical Theatre Company performances where David coaches and directs youth singers alongside semi-professional pit bands.